On Tuesday, May 23, KNRTU-KAI was visited by the top managers of Siemens, the German industrial giant. 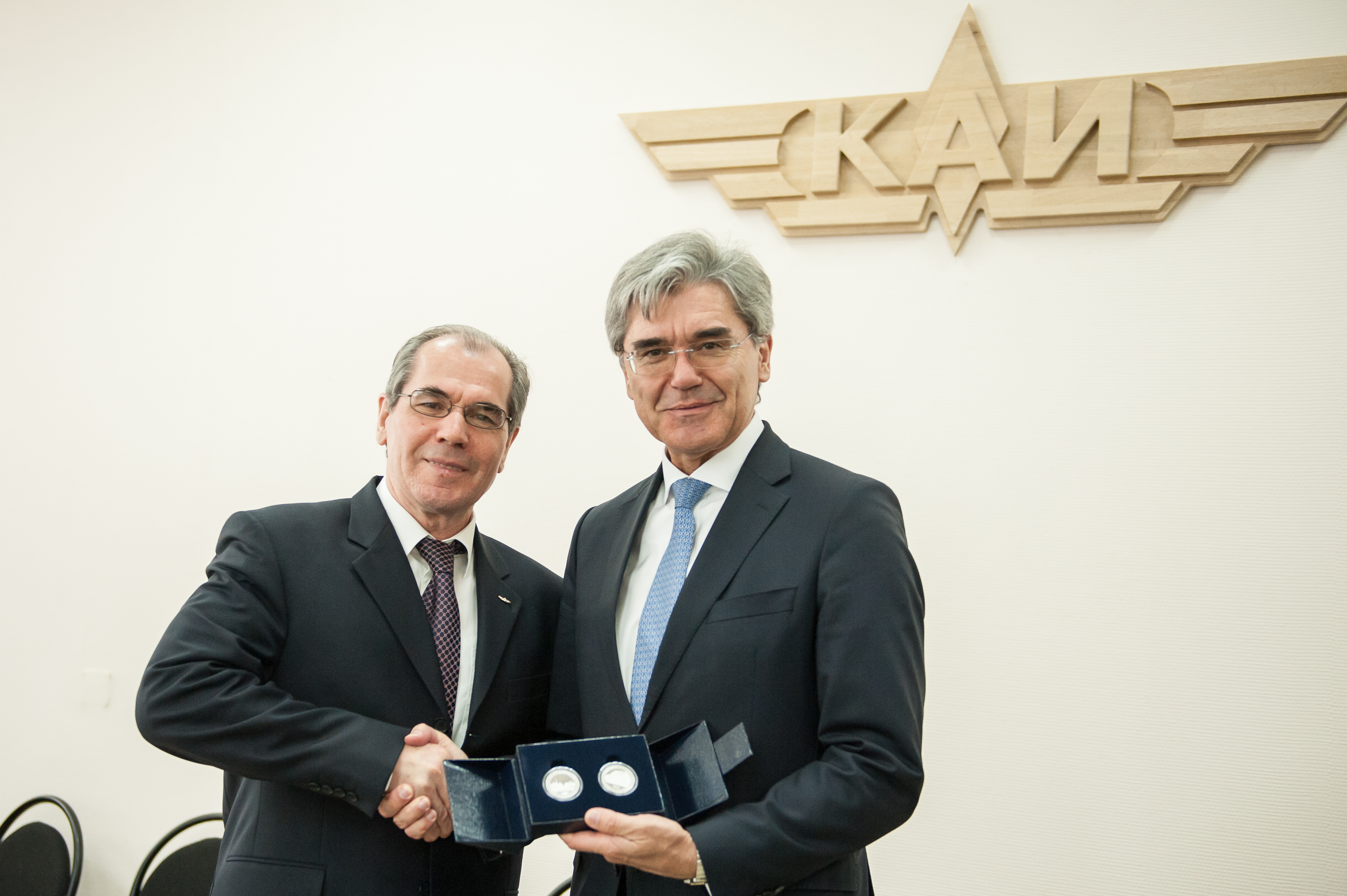 Earlier on Tuesday, the President of the Republic of Tatarstan Mr. Rustam Minnikhanov discussed and implemented joint projects with Mr. Kaeser.

KNRTU-KAI rector, Prof. Albert Gilmutdinov, has made a welcoming speech. He told the guests about the history of the university, about modern features of education and about KNRTU-KAI’s cooperation with partners in the industry. 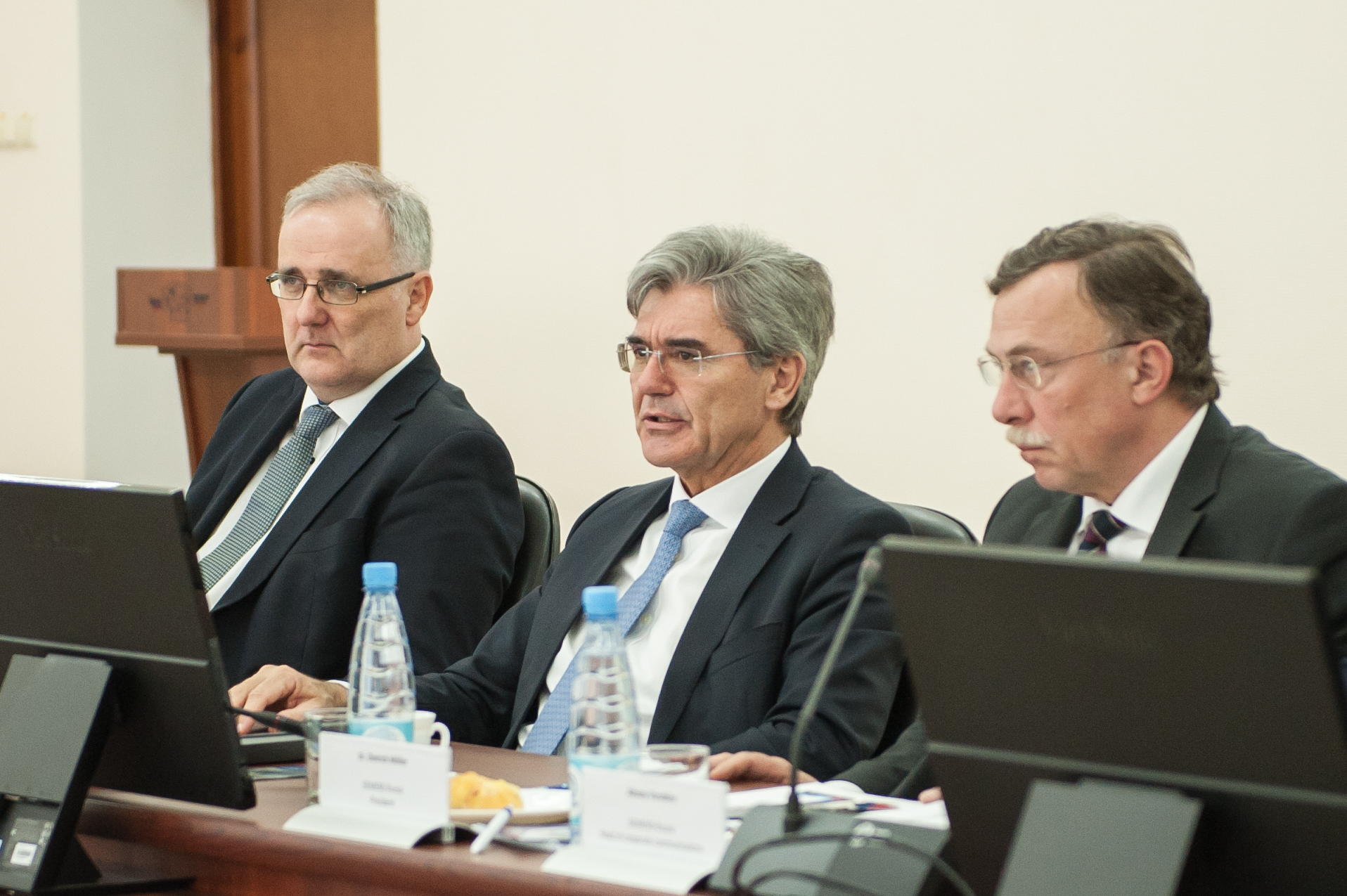 In his speech the rector paid special attention to the presentation of innovative centers of the university such as centers of additive and laser technologies, robotics, nanotechnology, composite technologies. Co-director of the German-Russian Institute of Advanced Technologies (GRIAT) Dr.-Ing. Sven Rost has made a presentation about GRIAT concept as an institution which not only trains high-level specialists for Russia and Germany, but also builds cultural bridges between the two countries.

Prof. Gilmutdinov noted that the main idea of the German-Russian Institute of Advanced Technologies is to train local personnel in accordance with the high educational standards adopted in Germany. He said that it is important for global companies, such as Siemens, to have highly qualified local personnel in every part of the world.

Mr. Kaeser highly appreciated the efforts made by KNRTU-KAI in this direction, and noted that in the training of management personnel should be given no less importance than scientific and research activities. "Changes in technology involve changes in society. It is important to bring technology into the values of society," he said. 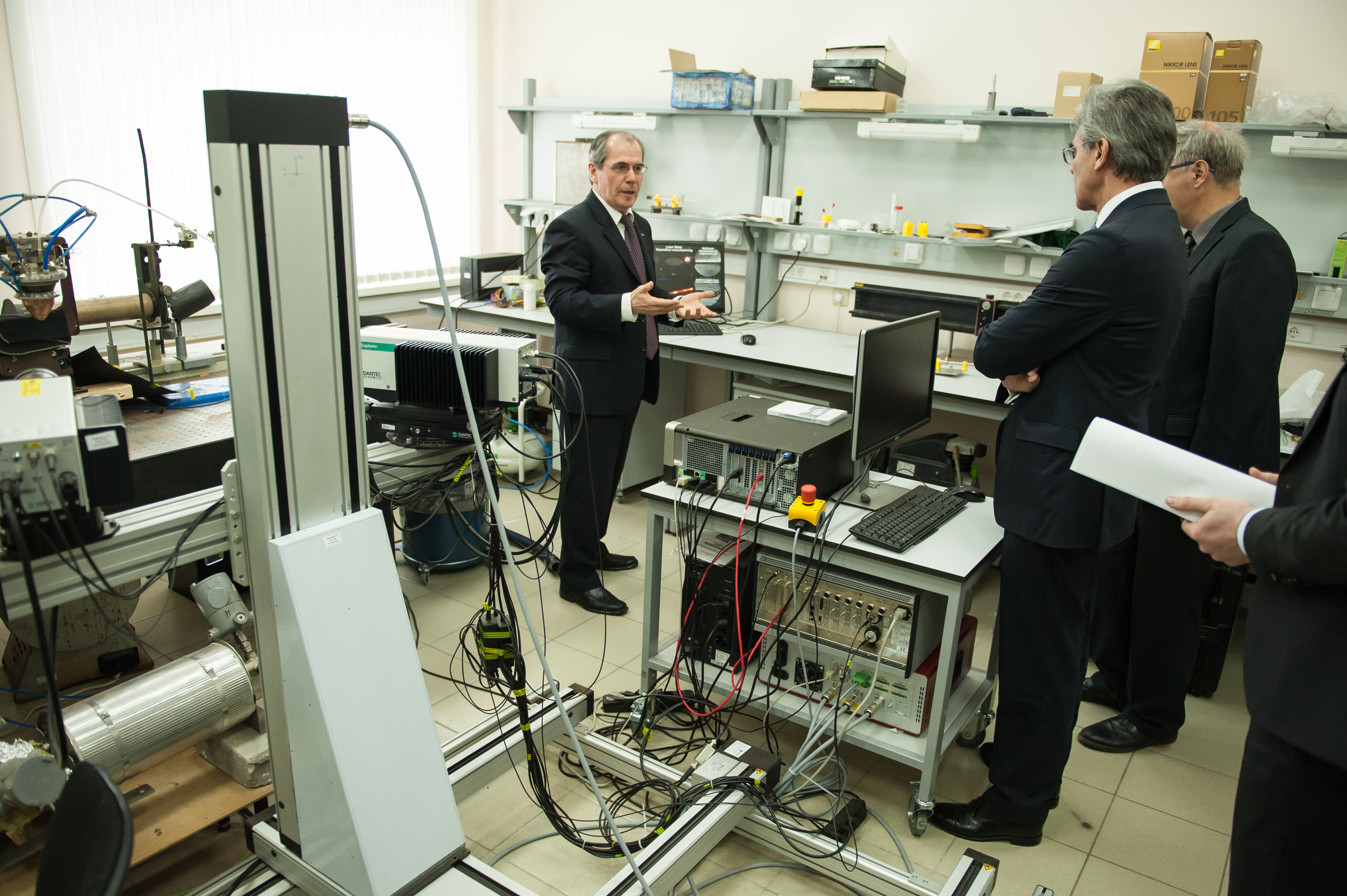 After the meeting which was held in the GRIAT Board of Trustees hall, the rector showed the guests to several laboratories of the university. In the Center for Laser Technologies, he personally demonstrated the equipment of the optical diagnostics sector, showed the guests educational laboratories on laser physics and on mechatronics and robotics. In the Siemens Engineering Center high guests were greeted by the director of the center Dr. Vladimir Mokshin. There the rector of KNRTU-KAI thanked Dr. Martin Gitsels and Mr. Dietrich Möller for their active assistance in providing the center with the equipment. 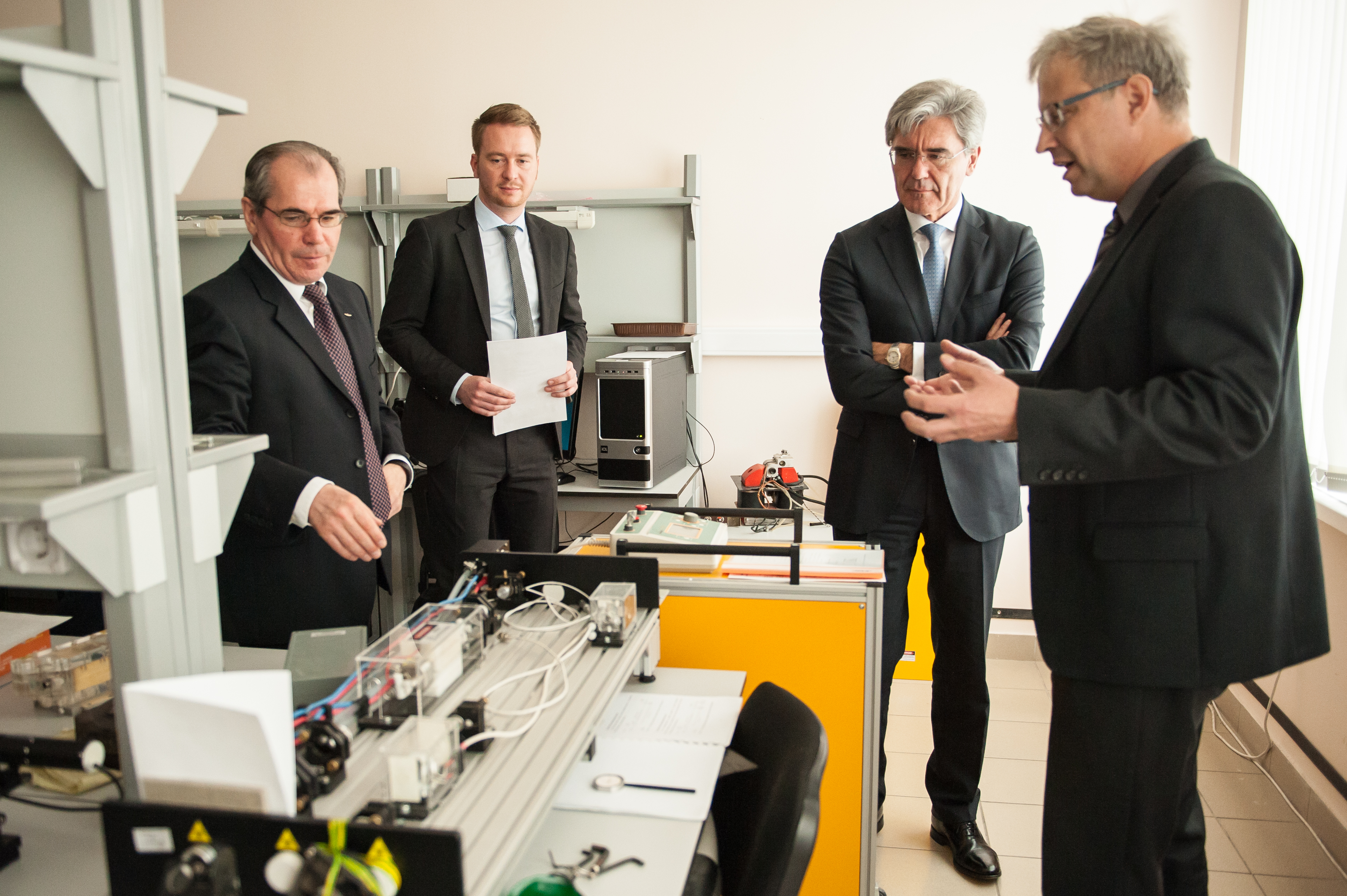 Dr. Sergey Moiseyev, Director of the Kazan Quantum Center of KNITU-KAI, spoke about the first multi-node quantum network in Russia and in the Commonwealth of Independent States, which was successfully put into operation by KNRTU-KAI jointly with the ITMO University (St.-Petersburg) in May. He also presented advantages of quantum communications that provide almost complete data protection against hacking due to quantum physics postulates. 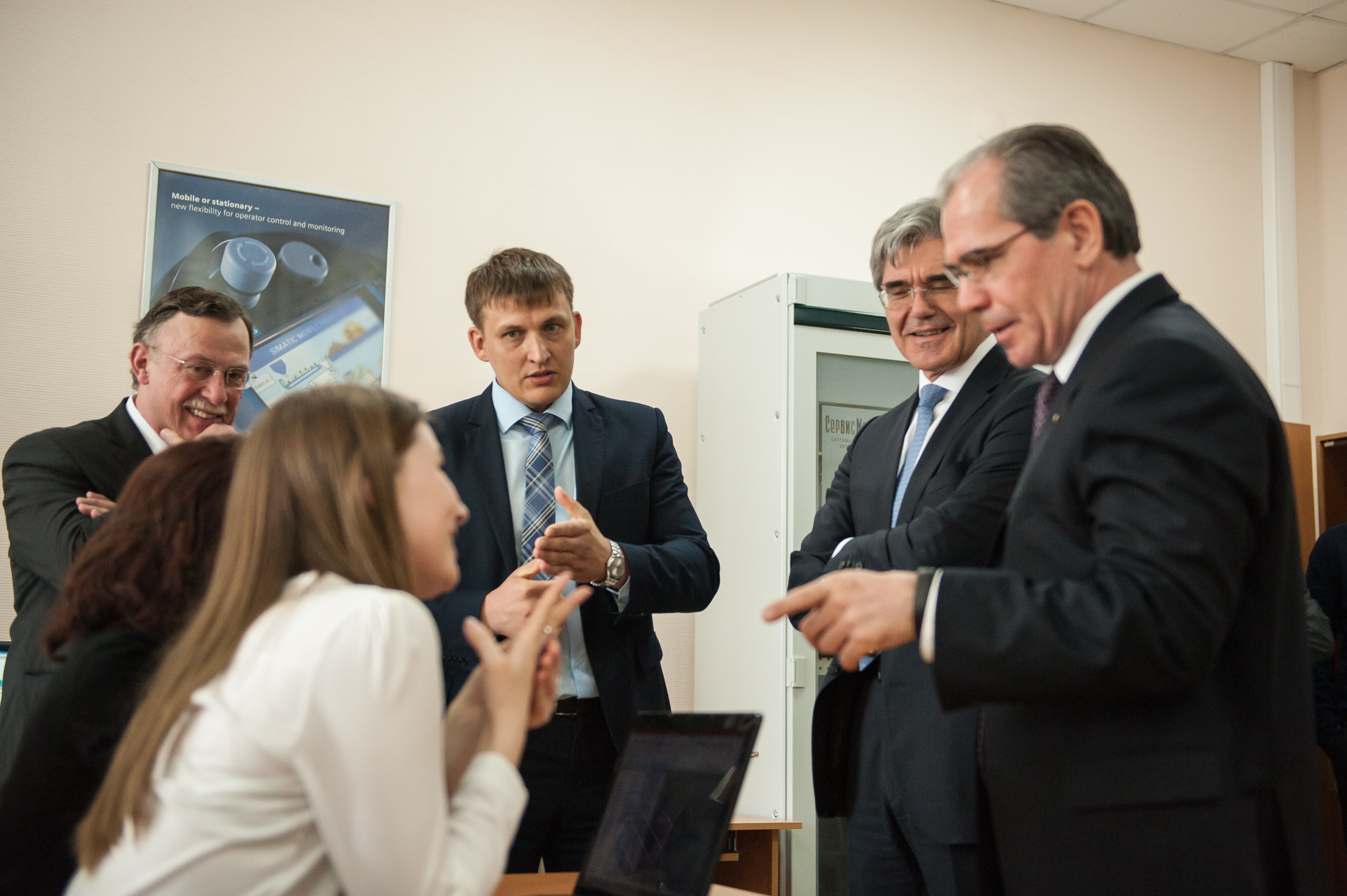 At the end of the official part of the meeting, the rector presented to Mr. Kaeser his book "Leadership Lessons", and a commemorative coin depicting the Kazan Kremlin and KNRTU-KAI.

Siemens AG is a German conglomerate company headquartered in Berlin and Munich and the largest industrial manufacturing company in Europe with branch offices abroad. The principal divisions of the company are Industry, Energy, Healthcare, and Infrastructure & Cities, which represent the main activities of the company.

Siemens AG is one of the world leaders in the field of electrical engineering, electronics, power equipment, transport, medical equipment and lighting equipment, as well as specialized services in various fields of industry, transport and communications. The Concern supports the activities of the German-Russian Institute of New Technologies and provides scholarships and grants to the best students. The cooperation of Siemens AG and KNRTU-KAI is being conducted within the framework of the strategic agreement signed in 2015 in Kazan.

According to Dr. Vladimir Mokshin, Director of the Siemens Engineering Center in KNRTU-KAI, one of the most important advantages of cooperation with Siemens is that GRIAT students get acquainted with modern technologies, have the opportunity to practice in companies that are partners of Siemens, strengthening their skills obtained during educational process.

Plans for further development of cooperation with Siemens include opening new laboratories, implementation of joint projects, creation of a certified Siemens competence center as well as the expansion of the use of Siemens equipment in educational process and in R&D.

RUDN Faculty of Economics held the II Eurasian Student Olympiad on financial accounting “Accounting Is Around Us”.

KNRTU-KAI has won a federal grant for establishing a specialized research center at the Engineering Lyceum.

KNRTU-KAI Enters the SCImago Institutions Rankings for the First Time

The university is represented in the 11 subject areas of the SCImago Institutions Rankings 2021.

Students of KNRTU-KAI Are Winners of Huawei Honor Cup Eurasian...

Russian-Belarusian Institute of Advanced Technologies Is Being...

The decision has been confirmed during the meeting of the Academic Council of KNRTU-KAI.

KAI Students Participated in the International Competition for Winter...

German Film Festival Took Place at the “Mir” Cinema with the Support...

The festival opened with a drama film "Transit", which was nominated for the Golden Bear at the Berlin International Film...

Memorial Plaque to Viktor P. Makeyev Was Unveiled at KNRTU-KAI

The plaque is dedicated to the founder of the Soviet-Russian school of sea missiles production.